Halloween is one of my favorite holidays. I think mainly because it is all about having fun. There isn't any worry if the in-laws are coming over, if I'm bringing over the right present for Aunt Tudy this year, if I'm making the right amount of mashed potatoes, etc. Just pure fun. Oh and candy, lots and lots of candy. 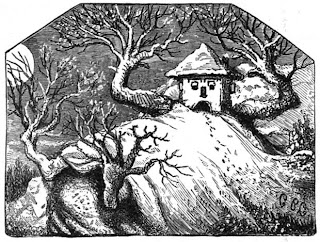 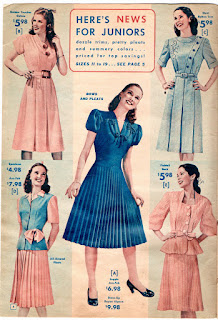 This weekend I sold more of my vintage clothing from my closed online shop to a local resale shop for some cash. I had become bored with my vintage clothing shop and want to really add more to my felt shop including other new items. So this meant that much of the clothing had to go.

However, on Saturday, I purchased a fabulous table from Ikea (to cut the felt on) with the money from the clothing I sold and moved all of my felt items from the living room to the extra bedroom. What a wonderful feeling! Not only can I now work in a quiet room (my boyfriend always has the tv on in the living room) but we got our living room space back! Oh joy!

I hope your weekend was just as great and productive!

***By the way- to my fabulous reader who recommended the Wellness cat food- thank you very much! I bought some this weekend for my sneezing kitty and he is in love with the food. I have never seen him lick the bowl clean before! This is sure to fatten him up!
4 comments:

Vintage Illustration and a Cat Update 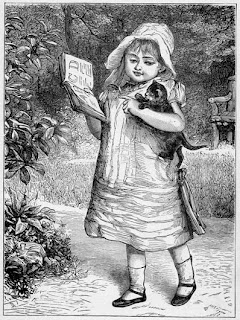 I have received a few requests for an update on our sneezing cat. First of all I really, really appreciate all of the responses and advice that was given. You all are very kind! I looked at all of your solutions and researched them on the web to see if that was the problem. 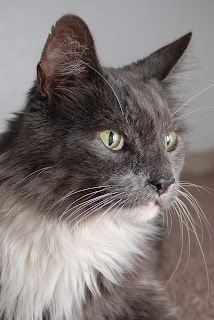 He wasn't feeling any better a few days after that last post so I took him back to the vet. We saw a different vet this time and she really looked him over- in the ears, nose, mouth and we even ran a few tests. The good news is that he doesn't have Feline HIV or leukemia. I was really worried about these two diseases because we have another indoor cat and didn't want to spread those to her. On the other hand the vet thinks he has feline herpes (to which my boyfriend at the vet replied, "see I told you I got the herpes from the cat." He was kidding of course, he doesn't have herpes, but the vet thought it was funny.) Feline herpes is spreadable too but since the two cats don't share anything or get too close to each other, I'm not too worried at the moment.

I guess there isn't a good test available for the herpes and there isn't a whole lot you can do for it anyway. But if he does have it, it compromises the immune system so it will take him longer to get well. Actually, I think herpes is a pretty good guess because all of the symptoms match this link. 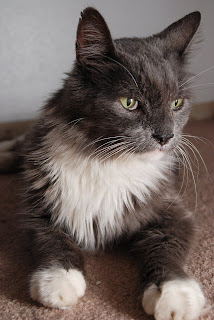 The vet gave us an antihistamine to try to dry him up so I gave it to him over the weekend. It made him super sleepy so after 3 days, I stopped the meds to see if it was any better. It seemed to work- the sneezing was quite less and he wasn't coughing at all. A couple of days ago he started really sneezing again, so I gave the meds to him and he was better. His appetite has improved tremendously and before the second trip the vet, he wasn't really wanting to eat- now he wants food every three hours which is great because he is underweight. It looks like this isn't curable but since I work from home, I able watch him closely to monitor any changes and then treat it right away.

I somehow came upon a website that says that you can improve a cat's well being with a raw meat food diet. I would like to try the Nature's Variety food and was wondering if anyone out there has their pet on a raw meat diet. Any likes or dislikes about raw meat for pets? Thanks! -Sarah
19 comments: 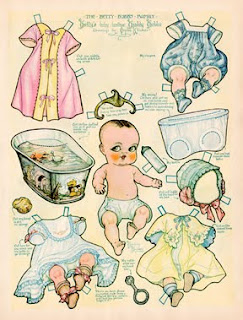 For some reason lately I really have had an interest in vintage Paper Dolls. I am always amazed when I find some that are in really good condition. How did they survive all these years without being cut out?

This is one of my latest acquisitions, from the Betty Bobbs Family, "Buddy Bobbs" found in an early 1920's Pictorial Review. His tub is too cute with animals painted on the side. I also have the full 8" x 10" image scanned at 300 dpi to purchase for only $1.00 here.
8 comments:

Boy what a nice sister! 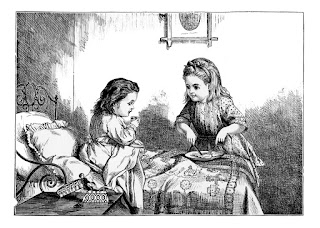 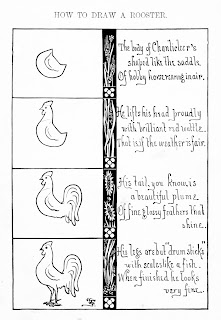 The holiday crafting season has begun! Well at least for felt anyway. I apologize for not posting here regularly lately but my Etsy shop has been slammed with orders. In fact I had no idea that so many people would want to purchase yardage of felt this year and I'm just not prepared for it. I am grateful that the shop is so busy but unfortunately it leaves me little time for this blog. However, I will still dedicate myself post but it will only be 3 times a week until the holidays are over. I hope that you will understand as the felt pays the bills and this does not. Thanks again for sticking around and reading the blog!
1 comment:

I picked up a fabulous old book from 1900 at the Goodwill today about Composers and Music. It has a bunch of great instrument images that can be hard to find. Here is one of a cornet. More instruments to come in the future! 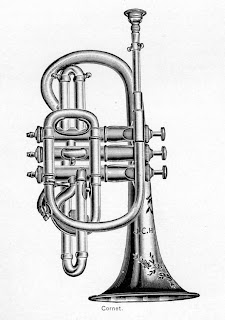 Vintage Clip Art- On the Water 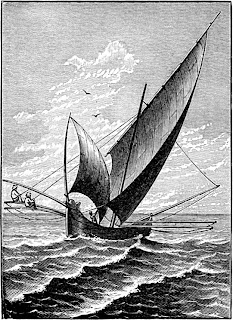 Being on the water with cooler weather sounds soooo appealing. Our temperatures here in Arizona still haven't dropped below 100 degrees during the day but the weatherman has promised that we will get there on Wednesday. Honestly, though I think he's just saying that because he's tired of the hate mail from viewers who are sick of the heat.
2 comments:

FREE IMAGES FOR YOU!

This blog is devoted to providing mixed media and collage artists original, OOAK images. The antique/vintage images I have collected/created are just perfect for all your artistic needs!

To save an image for PC users- just left click to enlarge, and then right click to save it. Mac users hold option and click to download or just drag it to your desktop.
Enjoy!

I need to mention, that although I try my best to make sure every image I have posted is 75+ years old, thus releasing most of the copyright laws, or copyright free, I do suggest that you do not use these images for resale or mass reproduction. If you have a question about a specific image please feel free to email me and I will get back to you as soon as I can with whatever info I have.
I am not an expert on copyright laws nor do I pretend to be...
Ta!
Carry on with your creativity!